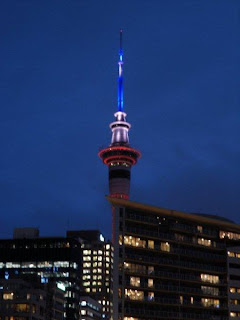 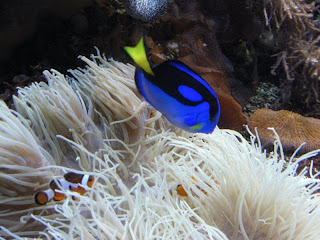 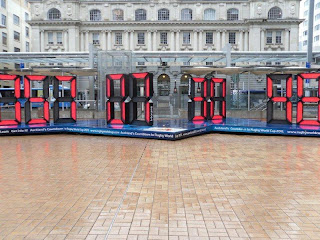 Good evening for the final time from Auckland, North Island and indeed for
the time being at least anyway, New Zealand.
The last couple of days we've spent doing the tourist thing around Auckland
and lots of shopping! Making sure we use every bit of the luggage allowance
possible! Weather had been typically wintery here, but worse in the South
Island. From having the problems in the ski resorts of having no snow, they
now have so much, they are closing resorts because access has been off!
Now, just to let you know, if you enjoy your steak rare, the kiwis have no
concept of 'rare' maybe medium rare at a push. Nevertheless, nice.
The Sky Tower has been decked out in the colours of the tricolor for the day
to help celebrate Bastille day here in NZ. Look really cool from the hotel
window. We've also been watching penguins (albeit in captivity) along with
feeding of stingrays, and shed loads of sharks and stuff at Kelly Tarltons
aquarium. Also, a mock-up of Scotts Antarctic base. All very interesting.
So, we've checked in online for our flight, an another 27 hours or so in a
plane awaits us, excluding stops. A bit more retail in the morning before
we have to catch the bus back to the airport, where I dare say more retail
therapy will take place!
For now...
T&A
And by the way, the numbers in the photo? Countdown clock to the start of
Rugby World Cup in Auckland 2011!
Posted by astromadman at 10:50