Only a small bleedin' delay! 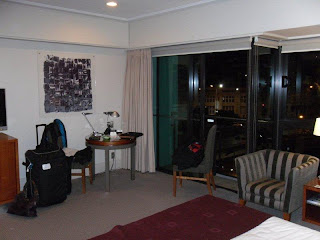 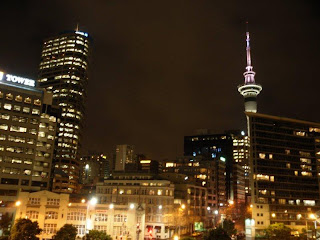 Evening one and all! How are ya?
So here we are in our little room in the Sebel Suites, Auckland. An early
start to the day speaking to a northerner who complained about being talked
into staying in a campervan for a week at the end of his 6 week holiday. No
pleasing some people!
We haven't really got much to say about today. Traveling most of it. We
dropped off the van and with a fond farewell caught our complimentary
shuttle to the airport, which is where it went a little bit wrong. Just
after finishing our chicken noodles, and with about 15 minutes to go before
boarding, my nose chose this moment to start chucking out claret. Really
badly too. 10 minutes with my head down the toilet and many handfuls of bog
roll later, it was time to make a break for it and get through security
complete with bleeding nose and tissue up my nose. Got to the gate and made
straight for the toilet again to continue the saga, but fortunately the
bleeding stopped literally a minute or two before being called for boarding.
Phew! And the delay? Well, we were just waiting for a few people from a
connecting flight. But, we did notice the only delays showing on the
departures boards were our friends from Quantas flying to Auckland.
As you can see from the picture, we've arrive at our hotel and have got a
suite with a 'City View'. Harbour views were at least twice as much, and
the view at night isn't as good I don't think. Tends to be a bit dark over
open water at night! The tower is the Sky City tower which we intend to go
up at some point. The room is lush! Complete with en-suite, fully fitted
kitchenette including cooker, over, microwave, fridge freezer and
dishwasher. We have our own washing machine and tumble dryer in out room.
Nice big bed with loads of space and a small balcony to look out over the
city from!
First impressions of Auckland? Well, not being a fan of big cities at all,
this is a pleasant surprise. Just a brief walk around this evening from the
hotel has given a glimpse of an amazing place. The credit card is
definitely under threat of getting a hammering here.
We've had dinner at a place down in the viaduct harbour just on the
waterside of our hotel. Fox's Ale house, speights beer with a T-Bone steak
and two fried eggs! Even just from the short time we've been here, we can
tell you will need to be here for weeks just to cover the eateries around
the place!
Keeping it short for now. Tomorrow, we explore Auckland more!
T&A
Posted by astromadman at 10:10