Don’t forget the chains. That was close! Nice Cow.

Good evening one and all. How’s it all going on the topside? In an attempt to try and fill in some gaps, it might be an idea to let you all know of some other things which I have neglected to fill you in on recently.
Firstly, the Avocado for $1. This still hasn’t been eaten and is still rolling around in the top cupboard of our van, just above where the sink is. The likelihood of us actually eating this before we drop the campervan off is decreasing by the hour. We’ll see how it goes.
Next, when in Queenstown, if you want a good meal, visit The Cow. Superb pizza in there. They also do all sorts of pasta but pizza is the main thing on offer. For people who have worked in Embrun in the southern French Alpes about 10 years ago, just think Christians. Tidy!
This morning we were rudely awaken (on time) by the sound of rain drumming away on the roof of our van. In truth, it had been doing so most of the night. This meant one thing really, if it was raining on us, it must be snowing up in the mountains. Surely enough, there, in between the clouds was a scene almost resembling a ski resort. At least, there was a bit more snow anyway. This should make for some interesting scenery to carry back up North we thought. So, we said our goodbyes and waved off from Ali and Alan who were continuing South to Dunedin, and we headed back out of Queenstown. Now, we had a choice. Which way to go? Initially, we thought, lets head via Lake Tekapo for views across the lake and up to Mt Cook. So we did. However, when we met the sign saying ‘Lindis Pass – Snow Chains Essential’, we thought, that’s OK, we’ve got snow chains. Linidis pass is a road which peaks at over 900 meters in between two peaks approximately 2000 meters in size. The highway goes up over the pass and onwards allowing easy access North. Without this highway, you face a very long detour of over 100km towards the coast. So, onwards we go, passing another sign warning us that snow chains were essential. Then, the rain turned to sleet, the sleet turned to snow and the snow started sticking to the road. Around the next corner and a site awaited us. ‘Oh dear’ I believe was the expression used. One stuck lorry which had lost its traction, and a second jack knifed right behind it. Fortunately we got passed those and could see the reason for the snow chain demands on the signs. 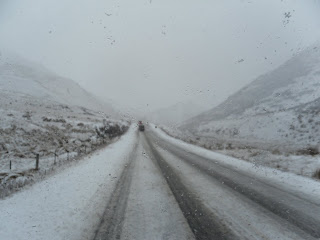 After that, we ditched the idea of the Lake as it meant that we would need to go over another pass of similar height. Instead, we got down to the next town and headed for the coast from there.
Have you seen this road sign before? 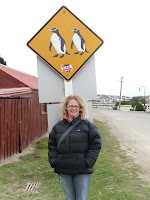 We have. Although not wanting to hang around long, we stopped in Oamaru for a bit of dinner. Fish and chips – what else? There a penguin colony here, but as with anything remotely interesting, you need to pay to see it. Nice as penguins are, we didn’t want to hang around until dusk to wait for them, so we had our feed and headed off. Tonight, we’re holed up in the Top10 in Timaru. Highlight of tonight – we did the dump station first so we don’t have to do it in the morning.
Tomorrow, we head North again, getting close to the main event and the main reason for us being on these islands. After nearly 2 weeks here, we should get to meet up with Shane, maybe meet Vicky, the wife to be. Then, the party gets started! Look out.
Posted by astromadman at 06:18