So long, and thanks for all the fish! 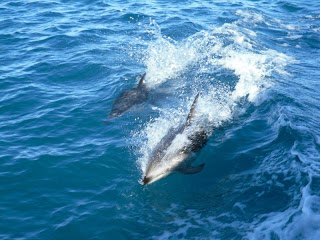 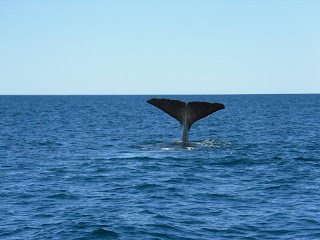 Evening,
A little bit of hitch hikers to get us started there!
First thing, to get us started - it's official, drivers of Juicy campervans
are all miserable buggers! A few hours of driving and doing the 'vanner
wave' to all appropriate vehicles, and not one Juicy waved back. I guess
they must feel a bit inferior because of their bijou little vans!
So the order of the day today. Get up. Struggled with that one, but that
only meant that I had a good night sleep through what was apparently very
windy and rainy weather. All I can say is when I got up this morning, the
ground was wet, but the sky was blue. Next, go whale watching.
Hah, there you were thinking that it was a random subject to the blog - but
you see what I did there?? However, we did not see any dolphins flying up
into space, and didn't see a giant blue whale and a bowl of petunias come
crashing down to the ground afterwards. If you're unsure, the first few
chapters of Douglas Adams 'Hitch Hikers Guide To The Galaxy' will make it
all a bit more clear. We were booked in for a 10am sailing with Whale Watch
Kaikoura - perhaps the most popular whale watching company on the South
Island. The trip included 2.5 hours at sea in a forecasted 50 knot NW wind.
Could be a bit lumpy! However, Verne (who was our bus driver to the marina)
told us they trusted their weather forecasts in exactly the same way as they
trust politicians! Expecting sightings of one, maybe even two whales during
that time, we boarded and off we shot across the bay. 15 minutes from the
marina, the first sighting happened and everyone clambered out on deck to
take a look. They resident whales are mostly male Sperm whales. The winter
temperatures means that the females move off leaving the males in the
feeding grounds around Kaikoura. We bagged our first whale sighting, and
then a second before the skipper heard about a super-pod of Dusky dolphins
closer into the shore in shallower waters. So off we went. Cut a long
story short, there were thousands of them! We had sightings of another 3
whales before it was then time to head back in. Apparently, 5 whales and a
massive pod of dolphins is regarded as a excellent session in whale watching
terms, so we are well pleased!
Back on dry land for lunch and a steak sandwich and BLT at Hislops organic
eatery in Kaikoura which marked the end of our time in Kaikoura. So, we bid
a fond farewell to the small village which left a big impression on us from
everything which has happened there in the last few days.
The next stint has brought us back up to Christchurch ready for our internal
flight back to Auckland. Over the last few days, we have got to meet some
fantastic people, many of whom live in and around the Christchurch area.
Obviously, the recent earthquakes have been spoken about, and many people
are still feeling the effects. Even as we sit on this site, we have people
around us who now live on this Top 10 campsite in their caravans due to
their homes being unsafe to live in. The people we have spoken to are just
getting on with it though. No one is dwelling on the recent quakes, but
striving to get on and rebuild their properties for their homes and
businesses. Speaking to Shanes Dad over the last few days, we discussed the
implications of the forthcoming Rugby World Cup games being moved out of
Christchurch because of the stadium being unsafe and possibly in need of
demolition. Christchurch doesn't deserve to miss out. A lot of
Christchurch is still open for business, and still need money from visitors
to keep the local economy on the go. We both agreed that come the time of
the world cup, if visitors avoided Christchurch because they were under the
wrong impression of it being closed, or in total ruins, then it would be
devastating. So, if you know people coming to New Zealand for the world
cup, or just for a holiday over the coming months and years, tell them DON'T
FORGET CHRISTCHURCH! It's open for business, there's plenty to do and
you'll have a wicked time!
Tomorrow we return our campervan which had been our little home for the last
18 days to its depot and board the plane ready for the third and final leg
of the trip. We wish we had more time to spend in this city, but time is
against us. Sebel Suites Auckland here we come!
T&A
Posted by astromadman at 10:46