Anyone for Hoki? No? How about somewhere to sell my Trout?

Hello people! First, random fact of the day. In a part of the world which prides itself on the fact it has extremely healthy stocks of both Brown and Rainbow Trout, did you know that it is actually illegal to buy or sell Trout in New Zealand? The things you learn from Tourism Radio! So, another night sitting down updating the blog after a BBQ rump steak cooked to perfection on the free to use outdoor communal BBQ on the site. Right then readers, have you got full bellies? Have you got beer in hand? If not, tough, I have, so here we go!
This is the first time we’ve stayed in one place for two nights giving us some time to explore the local area further. The problem is though, ‘local’ can still mean at least an hour’s drive in any direction, or a whole day driving round in quite an elaborate circle, or triangle as the case was for us today. Today we have explored from our little site here in Rotorua out to Lake Tikitapu and Lake Rotokakahi. Lakes which have been formed and shaped by volcanic activities for ‘quite a bit of time’. In the same area, the Buried Village is an attraction which as the name suggests, is an excavation of a site buried by an eruption in the late 1800’s. Today however, it was a bit cloudy so views of the volcano summits themselves were a bit restricted. Still, the views were pretty good. 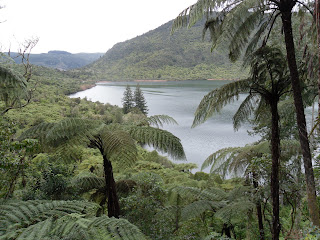 A quick ‘U’ turn and back on the road, past our campsite and off to Whakatane. In the Maori language, ‘wh’ is pronounce as an ‘f’ in English, or ‘Ff’ in Welsh, depending on your preference. This does cause us some amusement when trying to pronounce names, often coming out slightly wrong such as ‘F@$kafoofoo’, ‘F@$kareweware’ and ‘F@$kitstame’. Mostly centred around the original pronunciation of the place names, but with a bit of artistic license thrown in for good measure. So, leaving the eggy farty smells of Rotorua behind for the day, we go the Whakatane, noted in the Lonely Planet for its fish and chips, as well as many other things. Nice place, clean and quiet with the chance to go big game fishing for $1000 a day. I didn’t. So, we went for the fish and chips instead. Introducing Hoki. For the benefit of the uninformed, not a game played with wooden golf clubs on Astroturf by blokes insisting it’s not only a ladies game, but a type of fish. White and flaky, quite similar to cod, but a bit cheaper and available in the frozen section of all good UK supermarkets. Nice with Chips and lemon juice! Unfortunately, portions were small, and by the time we thought of taking a photo of it, it had gone. Next time we see it, it might not be quite so photogenic.
Next, WNW along the coast following the road along the pacific coastal road to a point where we could skip over the railway (no mean feat in a camper van) and park up next to the beach. Apparently, 26000 dolphins make this stretch of coastline their home. All I could say is that they either all on holidays, or taking part in a mass ‘hold your breath’ competition. We didn’t see sod all! If you don’t believe me, this is a photo of us seeing sod all! However, in the background, you will be able to make out the outline of Moutohora Island with the smaller Moutoki Island to the left of it. Both of which are volcanic, but not doing much at the moment! 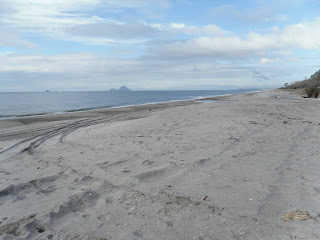 Onwards through Te Puke (or Tea Pukey) and Tauranga (figure that bit out yourselves). Now, we must pause at this point to initiate the uninformed of the decorum and rules of the road when driving a campervan in New Zealand. The main rule is, drive it like you stole it. But, there is another ancient custom when wanting to communicate with other campervan drivers. We have two ways of doing this, and a third way for the serious vanner. The first way is the one arm salute. Usually performed by the driver of each van, each driver in a very laboured fashion will raise one hand off the steering wheel, and with a straight arm, show the palm of their hand to the other driver before slowly returning the hand to the steering wheel. The knack to this is timing. You don’t want to raise your hand too quickly, show the palm and have your hand back on the wheel before you’re even with eyeshot of the other driver. On the other hand, you don’t want to be too slow as to confuse the drivers behind the camper you are waving at, making them think you are waving at them instead of the van in front. My suggested timings and distances are at follows. When traveling at 100KPH, begin the wave approximately 98 meters from the oncoming van. This should give you enough time to finish the way and continue on your way. Second to this is the very excitable ‘we’re in a van too and so pleased to see you’ wave. This can be performed by both driver and passenger and involves spotting an oncoming van and waving vigorously as if your hand was on fire and you wanted to show the world about it. Now, this wave does make you feel like a kid waving out the back window of the car at the driver behind you when you were little. However, there are many fellow vanners which will copy and repeat this back to you as if part of some ritual. By doing this, you are indeed saying to the other van ‘Oh, we’re in a van too, the same as you and we’re really loving life on the open road!’ Thirdly, the serious vanner. A bit of a waste of time and tends to be performed by older people, people who have their own vans, or people who have their own old vans. Nevertheless, it’s not so much a wave, more of a sneer whilst both hands remain firmly on the wheel and an air of ignorance exudes from the approaching van as if to say, ‘Humph, bloody armatures!’
And, back with the programme…. Tauranga made its name and is apparently famous (so famous that not many people have heard of it) for the good old staple food of every New Zealander, the Kiwi Fruit. For factual accuracy, google it, because I’m bound to get it wrong. However, what I can say is that on one Kiwi Fruit farm, you could get accommodation for $20 per night, but I expect there was some fruit picking involved in there somewhere. Kiwi fruits over hear are around 29 cents a kilo at the moment. So, southwards leaving the coast and heading back to eggy farty Rotorua again. A fuel stop in a station womanned (as opposed to manned) by a very cheerful and ‘I’m so happy to work in this petrol station’ lady before driving by to the city in the rain. A stop off in the supermarket to buy some rump steak along with some other detritus and back to site. Which brings us full circle to me, sitting here with a fully belly and beer in hand!
Tomorrow, play skool will be brought to you by the places Waitapu to see some geyser about some mud and Napier to find our next Top10 site.
Till next time…. T

PS, thanks to you lovely people who have sent messages about this blog. I appreciate you taking time to read it and hope you enjoy more. Feel free to forward the address onto anyone else. www.mountainmadness.co.uk
Posted by astromadman at 09:23