An apology starts this bit of news off for an omission to the entry from yesterday. Well, actually yesterday morning before we made our way to Waitomo. Before we left Kerikeri, we went to the local farmers market. Completely different to what we have at home – other than the fact people were selling stuff. Very laid back. 5 purchases made. Bag of Satsuma’s, two coffees, a freshly cooked blueberry flatbread, a jar of tomato chutney and an Avocado. But, how many farmers markets have a 3 piece electric jazz session in full swing smack bang in the middle of the market? I could have sat there all day drinking coffee and watching the world go by.
Anyway, to today. In daylight the Top10 site in Waitomo looks awesome. By far the best we have visited so far. And it was really quite too. We added to our Dump Station experience (I feel a whole new blog coming on devoted to dump stations what we ‘ave used in New Zealand), I took some pictures (not of the dump station) and then off for some glow worm spotting. We waited for the start of the tour in what appears to be a big car-port, but is actually a fantastic…. something or other. Look, see below… 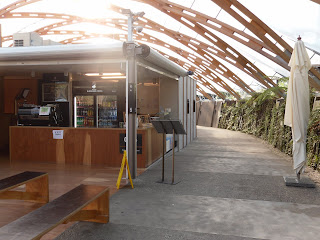 Then, off we went on a guided tour of the show caves and a boat trip in the pitch black looking for glow worms. I could go on for hours talking about it. It was amazing, but if you want to check it out, look at www.waitomocaves.co.nz Our tour guide was the grand daughter of the first Moari to conduct tours of the caves. She also said that the most inspiring and memorable tour she did around the caves was for a Welsh Male Voice Choir who performed in the 'Cathedral Chamber' during their visit to the caves. An impropmtu performance which has stayed with her and makes the hairs on the back of her neck stick out when she remembers it. Makes me proud to be Welsh! 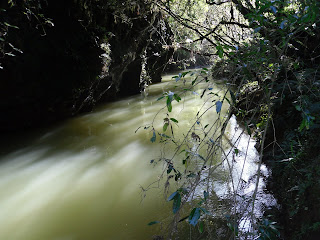 Back in the van and Max and Paddy were on their way once again, this time for Rotorua (as mentioned a couple of days ago, but not actually reached until today!) A few hours drive and a lunch stop along the way has brought us to this Geothermal oasis of a city towards the East cost. Loads of lakes all created by extinct volcano craters and location of various geothermal pools, eggy farty smells and some bloke or geyser who is always spouting off about something or other. We’ve decided that we’re going to meet up with this bloke in a couple of days, but to find out with this eggy farty smell has been coming from, we walked to the hospital….. and then past it to the local park. 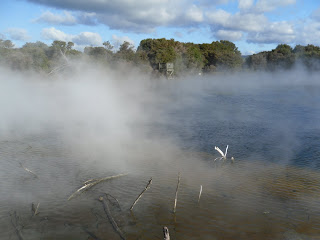 So now we find ourselves fully paid up members of Top10 and resident at the Blue Lake holiday park. www.bluelaketop10.co.nz We’re here for two nights which gives us a whole day to find out more about the eggy farty smells tomorrow.
Until the next time… T
PS BBQ Steak for tea.
Posted by astromadman at 06:50