Today, we went to the toilet.

Alright, so I got it wrong. The announced plan yesterday was we were going off to Rotorua today, but looking at the days left on the North Island, we found we were missing a day. Hence the reason why we are not in Rotorua, but are in fact in Waitomo. Long drive today down from the Bay of Islands and Kerikeri, but went through some fantastic scenery. We stopped off briefly in Pahia and had a stroll on the beach. The weather was kind to us and we had some nice views out across the bay. 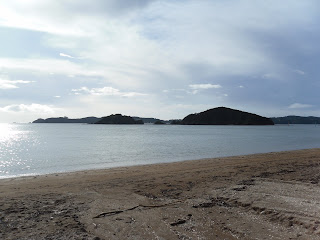 All the time, we’re listening to Tourist Tack Radio in our van. Did you know, the Kiwis have even turned an Oil Refinery into a tourist attraction? However, today we did visit a fantastic free visitor attraction. Today readers, we visited the Public Toilets! The Hundertwasser toilets are amazing, not only for the cleanliness, but also the empty bottles on Gordons Gin embedded in the toilet walls! 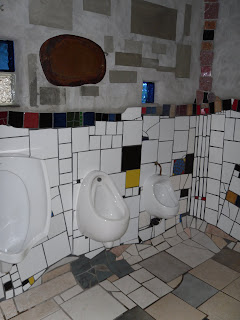 Didn’t feel particularly right walking around public toilets with a digital camera and a video camera, but then again, I suppose some people do it as a hobby!
This time, going over the Auckland Harbour Bridge, we had some good views of the city and what awaits us at the end of our tour around these islands. So, onwards and downwards we drove through Auckland city and out the other side again. Lunch at a pull over stop in Waiwera next to a creek and mangrove swamps. We met Howard the Mallard Duck who came to see us by our van. 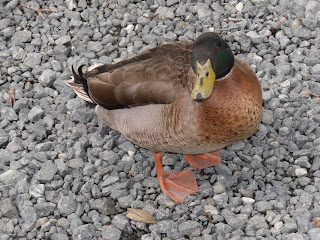 So, now we’re pitched up in Waitomo at the Top10 site. We arrived in the dark, but building on her vast knowledge and experience gained of public toilets in the last 24 hours, Ali reckons this one is the best yet. Tomorrow we going to some show caves to look for glow worms. I expect they’ll be easy to spot, what with them living in a pitch black cave, but glowing all the time.
We’ve made contact with Mark and Shelly today, our stop off in Palmerstone North, and also spoke to Shane about him getting married, and how he intends to go about having lots of babies with Vicky, but that’s another story!
Posted by astromadman at 10:42