All aboard the Pride of Cherbourg!

Good evening one and all. We do hope you’re all and that you’re not too upset that Murray has been knocked out again. I guess he can go back to being Scottish again now, at least until next time he stands a chance of winning something when he will magically become British once again!
It was a late one last night, thanks to the sailing over to the south Island as mentioned. To expand on the heading for this blog update… Yesterday we mentioned then little signs that life on this ferry is not all it is made out to be. Well, today we have hard proof! Today, we haven’t travelled particularly far, but in truth made it just a little South along the coast to Bleinhem. On the way, we took the chance to get to a viewpoint overlooking Picton where we had spent the night. And what do you know, it was just in time to see the ferry coming back into port! Sitting there armed with binoculars, video camera and digi cam, we sat quite happy snapping away. On closer inspection, we could see that our trusty transport from the night before was in fact more familiar to us as suspected. For there, under the painted name of the Kaitaki, was the raised lettering on the bow and stern of the ship showing ‘Pride of Cherbourg’. I know they like their recycling out this way, but that takes it a bit too far! 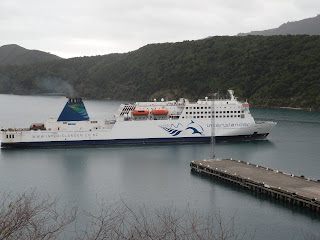 For the rest of today, we’ve spent time just touring around. We went to Havelock south and on down the Bleinhem taking it loads of lovely scenery along the way. 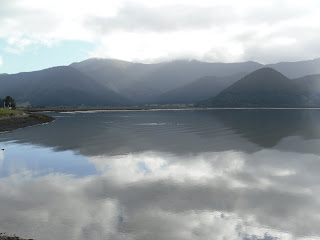 We’ve had a council of war and established a battle plan for the next few days. But you’ll have to wait to find out where we’re going from here. However, more on tonight… We have had the arrival of the woodmartin clan from over the ditch. Turning up in their almost brand new spangley camper and fully armed with some aussie dollars and few new Zealand ones, it wasn’t long before the first beer was poured, and the first bottle of bubbly was drank. It was then we decided we should pay a bit more attention to the immediate future of finding something to eat. Alcohol had been consumes by all four corners, so immediately the options were fairly restricted. To mull it over, we did what all sensible people should do, we went to the pub. Fortunately, this pub was only across the road from our campsite. It also emerges that it is the local drinking hole for the rugby team based around the corner who had been playing in their league cup final. At this point, I must explain that wearing a welsh rugby jersey in pub full of kiwi rugby players can be both good and bad. Within 5 minutes of taking my jacket off, I was asked if I wanted to play in a match, carry on with the rest of the tour with the seniors team and have a lift back to Kaikora in enough time for the wedding of the year. Absolutely brilliant people and I would like to think that any rugby club would extend the same friendship to any other visitors in the UK. However, this was bad purely to the timing! Any other time, it would of seamed a good idea, but somehow not tonight! After a bit of banter and chit chat, we finished the first ales and off we went in search of food. This wasn’t to last too long as the options were a take away Chinese, which was quite a walk away, a visit to KFC – enough said, or back to the pub. So, we went back to the pub where we should of stayed. All in all, more beer, lovely food, more beer, more beer and then an Ice Cream from the dairy on the way back to the site. Happy days.
Tomorrow, we’ve got a long drive to the next spot. I’ve booked us into our next Top10 site already. Now all you need to do is wait to find out where that is!
For now, T&A
Posted by astromadman at 10:20