On a Mission for Roosters

Got a couple of days to catch up on here. Quite busy and things to do in the evening haven’t left us much time to blog away. But, here we go. Wednesday morning, we found ourselves waking in eggy farty Rotorua for the last time and headed for Napier and the Top10 site. All well and good so far. Because of the down season, there wasn’t much on the site so we opted for the take out option, and a curry only to be warned whilst waiting for it by Mark ‘Taff’ Baker ‘ They don’t do curries in this country mate!’ A reasonably priced and interesting concept in Chicken Tikka Massala and Chicken Saag later, it was time to bed down for the night.
Three things were on the hit list for Thursday. Fish, Mission, Roosters. Although Fish and Roosters weren’t really planned, more just happened! Firstly Fish. Napier is the home to the National Aquarium of New Zealand which as the name suggests had fish in it. However, it also had Geckos, other Lizzardy type things and Kiwis. No photos of these I’m afraid because of the flash, but we did manage to get some video instead. It’s also got the typical tunnel under the sea where we saw sharks, sting rays and other wet animal life. Out of the aquarium and onto a Mission of different sorts.
Mission is a winery on the outskirts of Napier. In Mission, we met a bloke called Trevor. Very friendly bloke and typical barman. Chats to everyone, but his job also involved doing wine tasting, I forewent the tasting on the grounds of me driving – as well as not being able to stand the stuff anyway! But Ali got stuck straight in. I believe the order of the day was two whites, two reds and some dessert wine. Trevor even managed to make it sound almost interesting to a non-drinking, non-wine loving person like me! In between drinking/tasting he also muttered something about a brewery. Now, this is more up my street. Ali came away from her Mission with a couple of bottles of white. I get the impression cases could have been bought from the winery, but with only limited luggage space available for the flight home it might have been a struggle. So, whatever she bought has to be drunk by the time we go home!
Back to breweries. Trevor kindly informed us of the Rooster Brew House about 10 minutes away from the Mission winery. Claiming the food was awesome and cheap, and the beer even better, it was intel. we couldn’t not act upon. ‘Look for a rusty old red shack on the side of the road, go in and tell them Trevor from Mission sent you’ was the phrase he used. We could do no other than carry out his orders. Now, a few things all visitors need to know about Roosters. Number 1, you need to get your timing right. 12.00 midday is about a perfect time to get there. Any earlier and you run the risk of being a bit of a billy and not having any food. Any later than say 1.00 and you run the risk of the food running out. Number 2. All food, including the bread is all baked from scratch in their little kitchen out the back of the bar. Number 3. Legend has it that if there is any food left by 2.30, then it is left on the bar for anyone to have a free feed. But, judging by the amount of people that seemed to constantly streaming in, there was no fear of anyone having a free feed at all! Two bacon and egg rolls, a piece of quiche and a massive savoury muffin later, we turn to beer. Now, being a small brew house, tastings were offered, but at the risk of tasting all day and not being able to push on afterwards, it was decided that a purchase was required. Now, any bar which has no apparent glasses, but only a minimum of 2 litre bottles to contain your beer is alright by me. Roosters offer their beer in 2, 5, 10, 20 and 50 litre take outs. Shame! 5 beers in place with a seasonal 6th left me with some work to do. Some of it was easily discounted from selection with just the faintest mention of coffee and chocolate in their tasting notes, but the draft and the light wheat ale caught my eye. So, helped myself to two 2 litre bottles and off we went.
Our hosts for Thursday night were going to be a recently expanded family. Mark, Shelly, Ollie and Mylow. (Ollie being the new addition.) Without wanting to bore everyone, Mark and I have known each other since we were born, living as we did next door but one from each other in the earliest of early years. 32+ years later, he is now married to a locally yocally called Shelly and settled just outside Palmerston North, both now very proud and happy parents of Ollie and owners of Mylow the doggy. Other than one brief visit for a couple of hours when Mark was back in the UK a couple of years ago, we hadn’t seen each other for around 10 years. So, when the chance came to crash there and meet the family, it just had to be done. Shelly’s lovely and I think has tamed Mark. Mark hasn’t changed other than a bit of Kiwi infringement on his accent, but hey, if you’re going to adopt a country as your own, you might as well go the whole hog! Nevertheless, Shelly has Mark firmly under control, demonstrating this in fantastic form as she did when collapsing the pram and getting it into the back of the car in way under one minute. Mark and my attempt took approximately 7 minutes between us. We caught up and drank beer. Roosters beer to be precise. 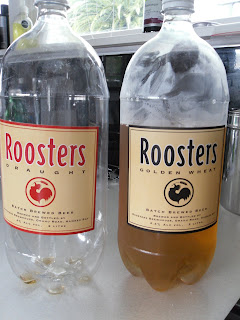 So, Friday morning after some excellent hospitality we left the Bakers at home and headed for Wellington. 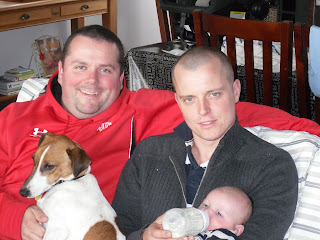 Now, there is a sub-plot to all this which concerns a flight from Oz being cancelled, re-arranged, one less night in a campervan, a hotel at an airport, a different flight to a different city, another flight to another city, a hire of a campervan, a cancelation for one pitch at the Picton Top10 and an ash cloud. Put all that together and what you have is the saga and misery which our friends Ali and Alan have had to endure just to catch up with us on our little adventure. Long had been the plan, so perfectly put together, that they would meet us in Wellington Friday evening before catching the Interislander Ferry over to Picton and be here with us right now. Best laid plans and all the rest of it! Mother nature and more specifically Quantas airways didn’t like that idea and obviously flexed their muscles a little. So, Ali and Alan are now meeting us tomorrow somewhere around the North of this Southerly of islands for our adventure to continue.
The Interislander Ferry appears to be something kiwis are really proud of. Linking up their two main islands in a crossing which lasts 3 hours. Apparently, it’s stunning and an excellent way to spend a bit of time, checking out the views and scenery. That is until it gets dark. In the pitch black, you can see naff all, and with a grand total of 30 passengers on board and most of the amenities closed on board, there was nothing to do but catch up on a couple of hours sleep on the floor of the reclining chair lounge. The lights were left off, so the only thing preventing me from getting continual sleep was a kick in the ribs from Ali. Apparently I was snoring, but I don’t think I was. Now, before we got on board, we’d heard rumour that these vessels might be a little more familiar to us that first though. We heard mentions of continental crossings, of time on the English Channel and such like. Suddenly confirmed when on the car deck, Ali spotted an old P & O ferries sign which hadn’t quite been covered up properly. We were in fact on an old P&O freight ferry, probably one than operated Dover – Calais in its former life!
So that brings this unfeasibly long Blog entry to a close with me here typing, and Ali now sleeping in bed, pitched up in the Picton Top10. Tomorrow the next leg of the travels begin. South Island, we’ve arrived! Show us what you’ve got!
Posted by astromadman at 14:38